One of the things I was excited about during my three month stay in the UK was shopping in the supermarkets. I looked forward to the array of produce and ingredients I did not have access to in Manila, at least not at reasonable prices.

As excited as I was to shop and cook, though, I had to be more thoughtful about what I chose to make at home. In the Philippines, I had at least five other people to feed, so baking pans full of baked pasta or chicken thighs were not an issue. But the same approach would not work for me in England. It’s not possible to cook just half a lasagne without having to either buy a brand new baking dish, risk a half-open box of pasta going bad, or eat the same thing for a week straight. Hence, I had to look for recipes that were adaptable and practical to cook for just me and my roommate.

I zeroed in on salmon recipes, as fillets of Scottish salmon were available in convenient pairs at Waitrose and Tesco. Maybe because I’ve seen them cooked that way in some cooking show, I Googled “salmon baked in foil” and the first search result was this recipe by Giada de Laurentiis.

The flavors were right up my alley so I decided to give it a go. I’ve never cooked salmon before this, so I was a little nervous, but I figured things couldn’t go that bad with tomatoes, lemon, thyme and oregano. 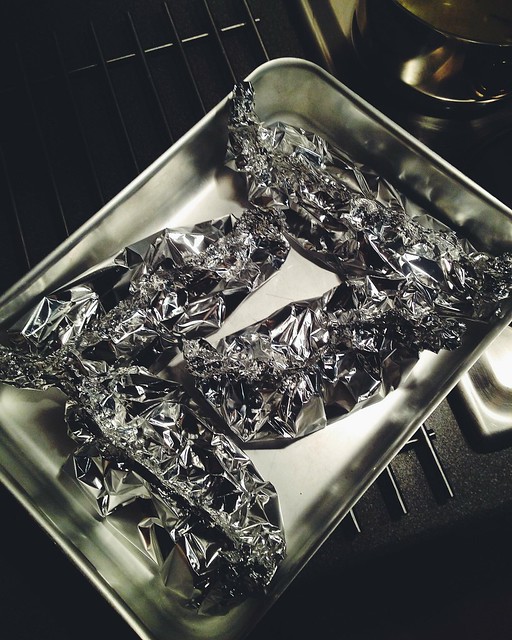 I was right. The result was tender, moist, flaky salmon infused with all the flavor from the herbs and lemon. Despite zero marinating time and a short bake in the oven, the fish is quite flavorful. Another plus is that it takes only about 45 minutes to make this dish from start to finish.

To accompany this dish I chose  Garlic Sauteed Spinach from Ina Garten because the the Food Network site said it only took 10 minutes to make. It’s as straightforward as it sounds, it’s spinach sauteed with a lot of garlic, but with the special Ina Garten touch: butter. As much as I adore butter, I wasn’t too sure about how well it would go with spinach, of all things. But I never should have doubted Ina. I now make amends for my lack of faith by adding more butter than the recipe calls for. 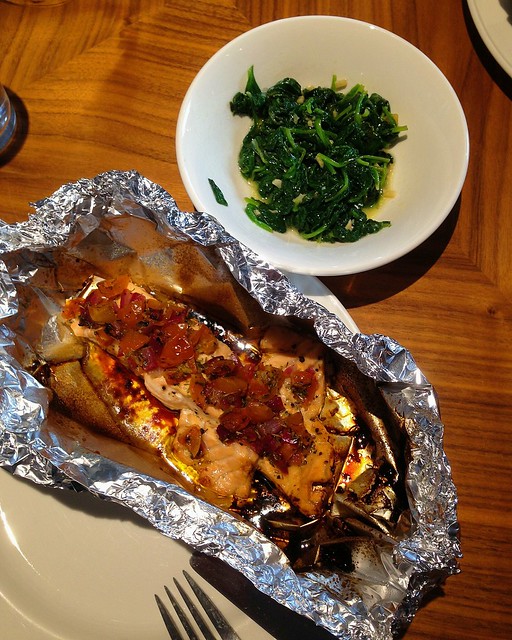 I make the spinach about fifteen minutes into the cooking of the salmon, so that they are both done at the same time. If the salmon is done before you’re finished making the spinach, don’t sweat it, just take the pan with the foil parcels out of the oven, the fish will stay warm as long as you don’t open the packages. I’d rather have the fish waiting for the spinach than the other way around, because the veg is best when served immediately.

But both are so easy to make, though, you’ll probably work out the timing to have them done at the same time by your second or third go at them. The other wonderful thing about these dishes is that making them for two or six doesn’t really result in that much more work and time, you’ll just have to slice a bit more tomato and garlic.

These two recipes make for a very quick, easy, and, lovely meal (I would’ve said “healthy” too, but I think the amount of butter I top my spinach with prevents me from saying that). I was surprised at how something that took so little time and effort could yield such elegant results.

Now if only finding fresh, affordable salmon in Manila was just as easy and quick.