I honestly still can’t believe it. It really still feels like I dreamed it all up. I was in Madrid. I went to the Santiago Bernabeu. I watched an El Clásico.

So, yes, I am writing about this here partly to convince myself that I was there. It happened. One of my wildest dreams came true.

When I found out I was going to be sent to the UK for three months for work, one of the first things I did was to check the La Liga calendar. My heart started racing at the realization that I will be in Europe for the second El Clásico of the season. And it was going to be in Madrid. I was all in a tizzy, and that was maybe four or five months before I even left for the UK, before I even made the final decision to go.

There was no question of me wanting to go, of course. But the El Clásico is arguably the biggest league match in Europe, if not the world, and tickets are hard to come by. Even if any become available, the prices are enough to make even the most ardent fans balk. It was not an easy decision to make, but as my friends pointed out, it was a golden opportunity. I was in Europe at the same time as an El Clásico! When else will that ever happen again (without even more expense on my part, that is)? And so after some considerable stress with the Real Madrid website (why is there no confirmation page when you purchase via the English site, huh, Madrid?) and some Google Translate, I was the tearful, hysterical owner of a pitch-side ticket to the match of my dreams.

And the tears came flowing again as the stadium slowly loomed large while we were driving down Av. de Concha Espina, on the way out of the city for some sightseeing. I couldn’t help myself to request my hosts that we drop by the stadium for some photos, even if I was going to be back for the match that evening and for the stadium tour the following afternoon. 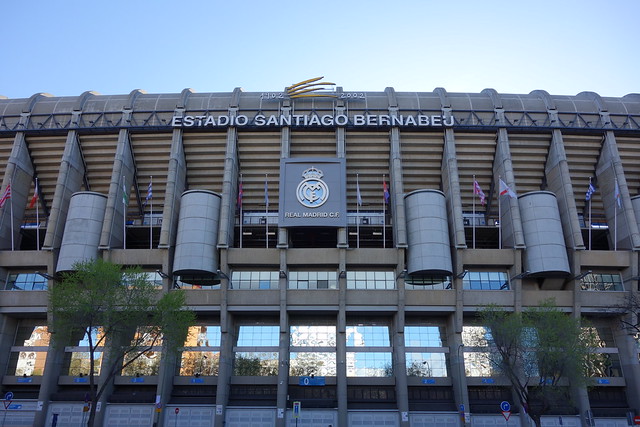 I guess it goes without saying that there were more tears.

Fortunately, I managed to get a hold of myself for the match. I did not tear up, although my stomach was in knots and my hands were clammy. I was surprised I did not lose my shit as I took my seat. Everything about the Bernabeu, the scale of it, the noise, the fans, was overwhelming. It was bigger, louder, and crazier than anything I imagined. It was perfect.

We are going to the #ChampionsLeague final!!! #halamadrid! So so proud and happy!!

I have photos of the team’s warm-up and during the pre-match ceremonies. When the match got started, however, it was hard managing a camera and trying to keep up with what was going on across the pitch. I finally decided to give up and focus on the game, to watch it through my own eyes and not through my camera’s tiny screen. 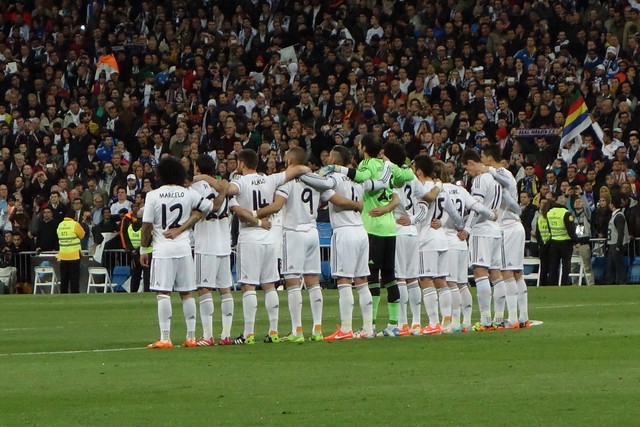 It was thrilling to watch the team I have watched so many times on television live, in the flesh. It’s unbelievable how much quicker everyone is in person versus on TV, Gareth Bale in particular (fine, ok, Messi was great, too). 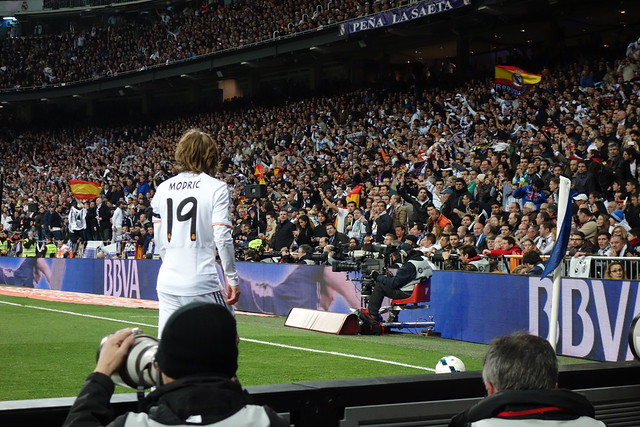 We didn’t win the three points, but the match was fantastic. Ending 3-4, it has been called by pundits as the best Clásico in recent memory. And I was grateful to have been there for it.

That wasn’t the end of my Real Madrid experience, though. The next afternoon, I went on the Real Madrid stadium tour. I was awed by the size of the Bernabeu the night before, when it was filled to the rafters with fans. But it looks even bigger when it’s empty in the daylight. 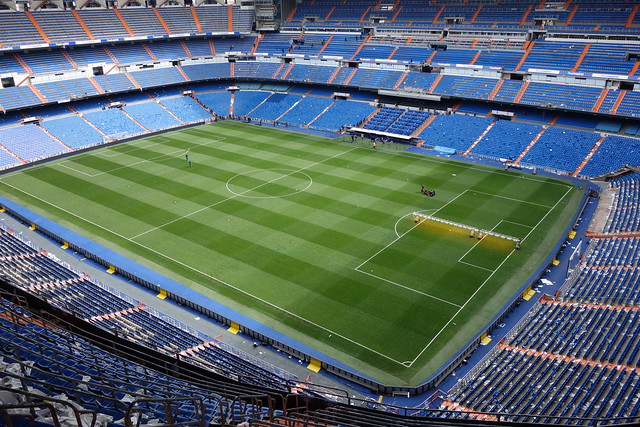 The tour starts almost from the very top of the stadium, and you work your way down. It includes the the team museum. And while the museum is a little too self-important and self-congratulatory even as team museums go, there are little gems to be found, like the shoes on the left: Zinedine Zidane’s boots from the La Novena final, no longer our LAST Champions League title . How wonderful it is to be able to say that. 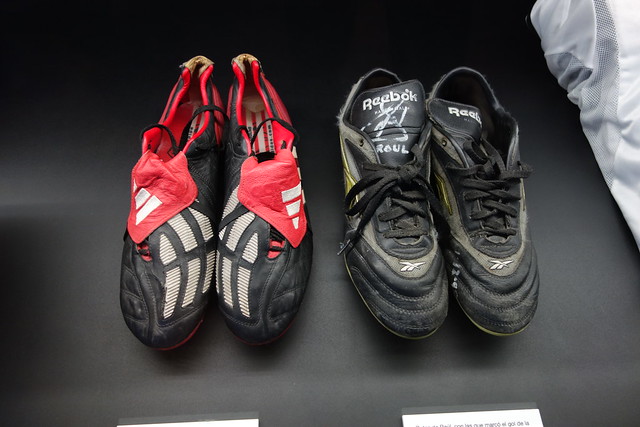 From the museum, you make your way down the stands to pitch-side level. Then it’s up again to the President’s box, from where this shot was taken: 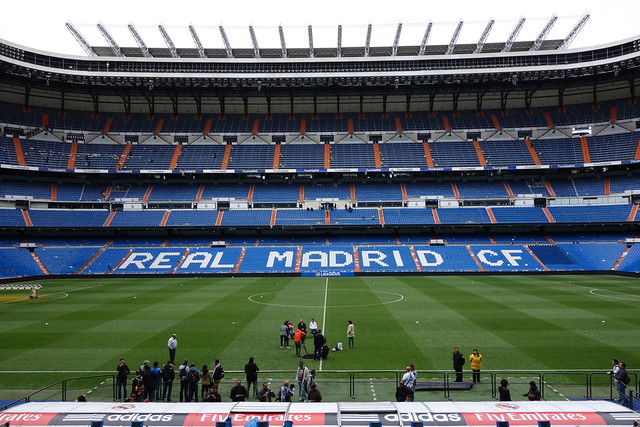 I didn’t realize that the tour included the team’s locker rooms. Imagine my shock when I entered a door found myself facing a row of toilets, followed by these: 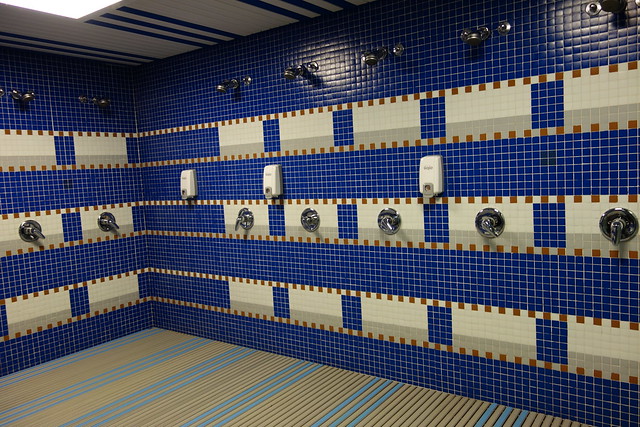 Any fan could imagine what kind of thoughts were buzzing around in my head at the sight of the team showers and sauna. It was fascinating to me that these facilities were part of the tour. Apart from the icky thought that hundreds, probably thousands, of visitors walk through what is basically someone’s bathroom and closet… well, let’s just say there were other thoughts.

However, my favorite part of the tour were the lockers. It blows my mind that I was standing there, in the same room where the likes of Jose Mourinho and Carlo Ancelotti give their half-time talks/sermons, where titles were drunkenly celebrated, or losses mourned. This was only a place I read about where Sergio Ramos played his (probably questionable) music, 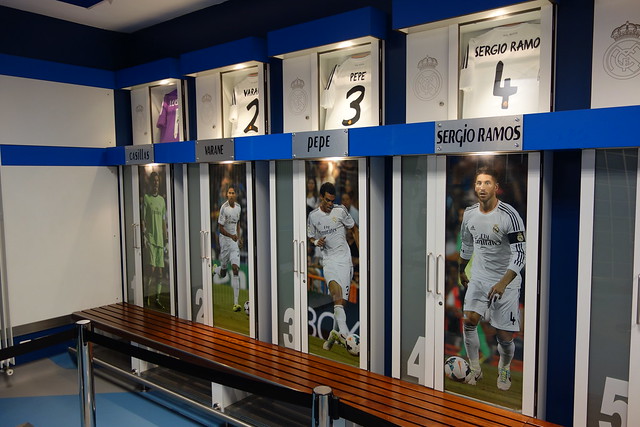 and where the incomparable Xabi Alonso used to hang (sob!) his impeccable clothes, 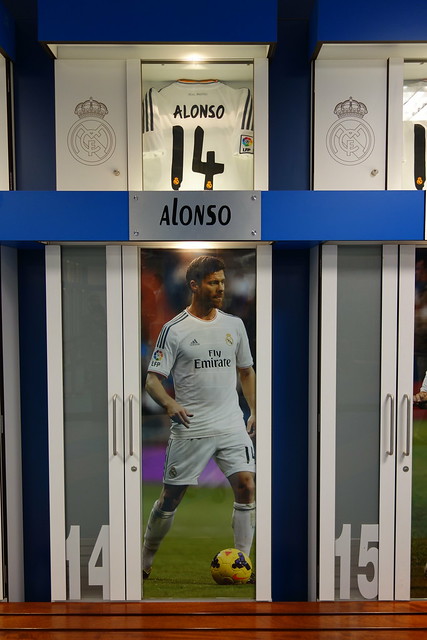 and where Cristiano hangs his awful Gucci belts. 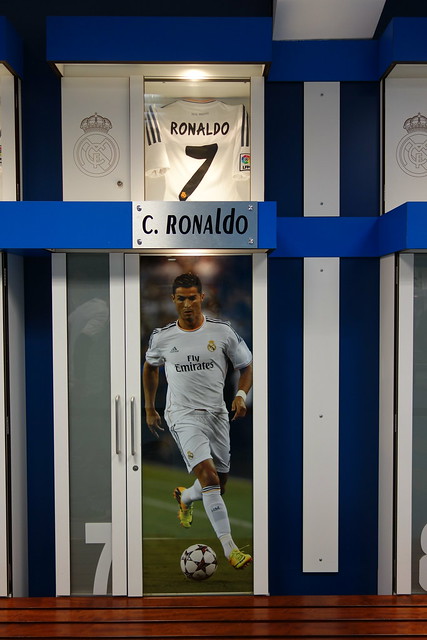 After spending as much time as one reasonably can staring at lockers, I was off down the tunnel. It was surreal walking up and down the same steps the players do before and after each match. 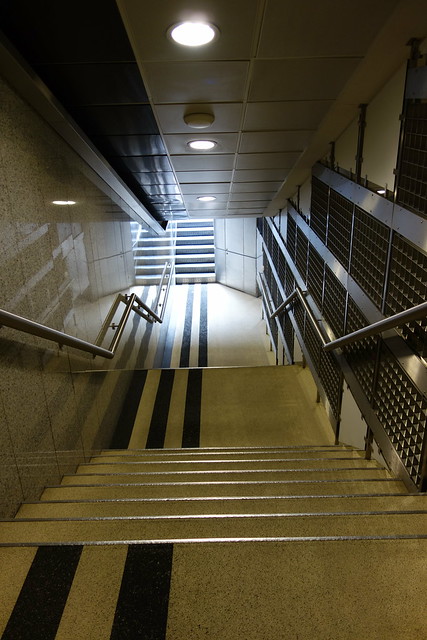 The stairs bring you right to the player benches and the centerline of the pitch. I am a little ashamed to say how much time I spent just standing there, taking it all in, and also waiting for the Real Madrid TV crew who were doing an interview in the middle of the pitch to clear out so that I can take my photos with a near-empty pitch:

I am still in awe of the entire experience, and part of me still can’t believe it, even when I have pictures to prove that one of my wildest dreams has come true. I was there, amidst the Madridistas, cheering my team on against our greatest rivals. I was there, where some of the greatest players of the world have walked through , where history has been made, where dreams have been fulfilled, where hearts have been broken. I was there. And in a way, I always will be.

2 thoughts on “Another one off the bucket list: An El Clásico in the Santiago Bernabéu”