They gradually ascended for half a mile, and then found themselves at the top of a considerable eminence, where the wood ceased, and the eye was instantly caught by Pemberley House, situated on the opposite side of a valley, into which the road with some abruptness wound. It was a large, handsome, stone building, standing well on rising ground, and backed by a ridge of high woody hills;—and in front, a stream of some natural importance was swelled into greater, but without any artificial appearance. Its banks were neither formal, nor falsely adorned. Elizabeth was delighted. She had never seen a place where nature had done more, or where natural beauty had been so little counteracted by an awkward taste. They were all of them warm in her admiration; and at that moment she felt that to be mistress of Pemberley might be something!

Chatsworth House, the real Derbyshire estate of the Duke and Duchess of Devonshire, is believed by some to be Austen’s inspiration for Mr. Darcy’s fictional estate. The above description seems to fit, as you’ll see later. But it is certainly Pemberley for the millions of fans of the 2005 Pride and Prejudice adaptation (including myself), and it has been my dream to visit the estate since I saw Joe Wright’s film.

There was so much to see on the estate, and everywhere I turned, there was a picture-worthy vista. To be able to even come close to doing Chatsworth justice, I’ll be doing multiple posts on the estate.

For convenience’s sake, I chose to stay at the Cavendish Hotel, located within the estate. 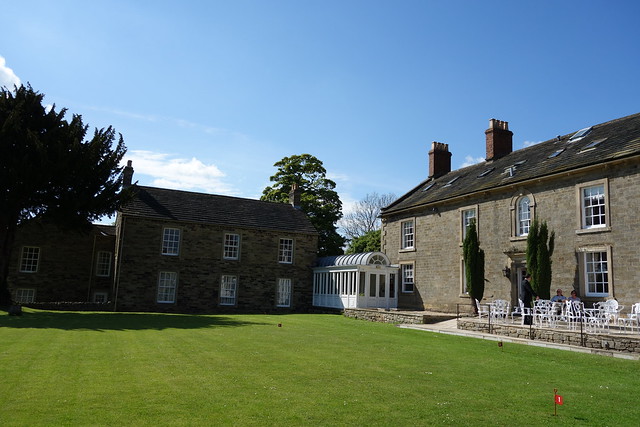 My room was on the ground floor of the building on the left, with the open window in the center.

The hotel was lovely, but the view from its lawn was even lovelier: 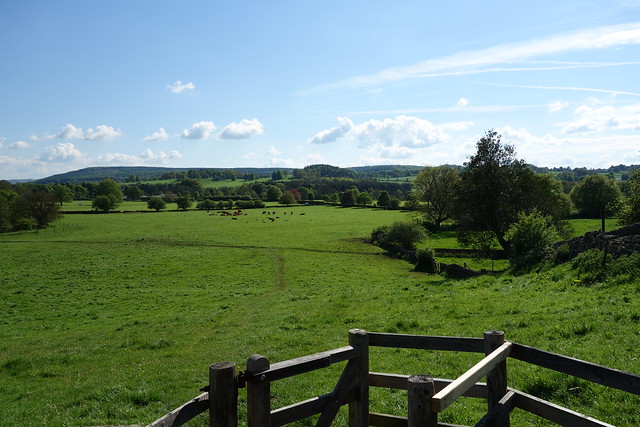 One way to the house was through the gate in the picture, across the field to the left, across a bridge, and on to a path to the main Chatsworth grounds. However, I only took that way on my first day, as the cows tend to take over the nearby field. The cows do get skittish around people, although I was more afraid of the, errrr, souvenirs that they leave on the grass. I took mound-free way on my second day.

The path to the house was as picturesque as you can imagine an English countryside path to be. 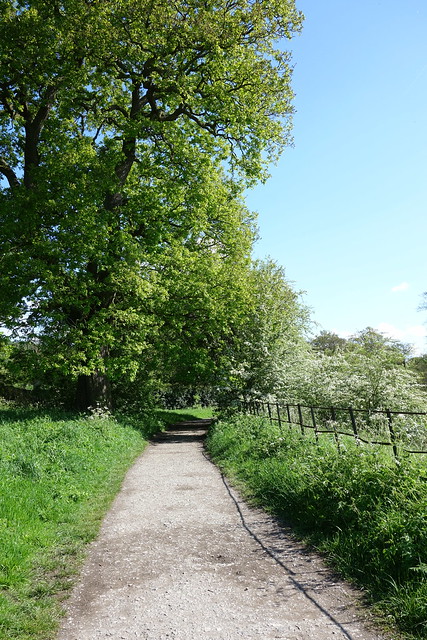 You can almost imagine running into Elizabeth Bennet on one of her famous solitary rambles. 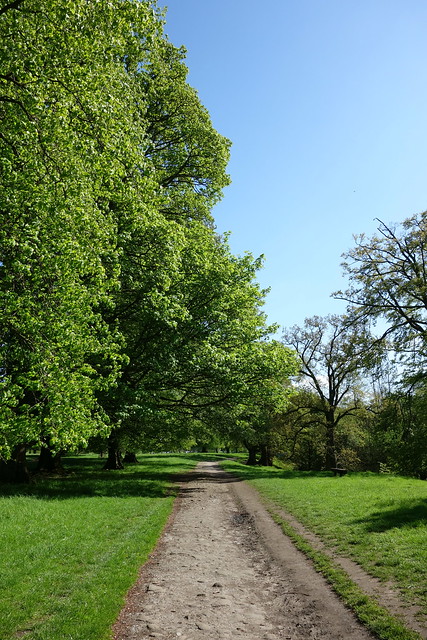 The walk from the Cavendish Hotel to the house took about twenty to twenty-five minutes. The house is hidden from view by trees for most of the way, and you never really see it until you are quite close to it, which certainly heightened my excitement (and strained my poor neck). 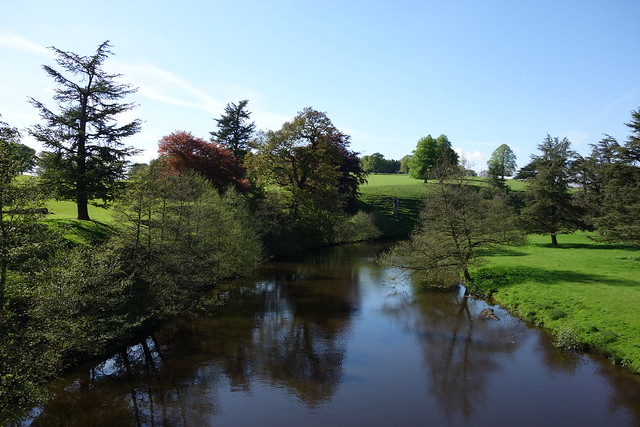 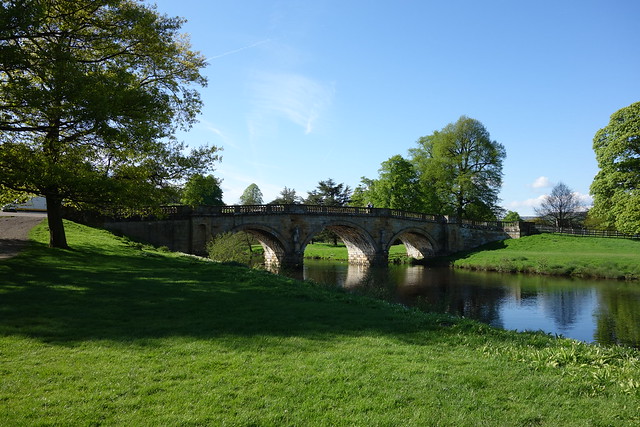 And from the plain Paine bridge, I got my first full of view of the majestic house. 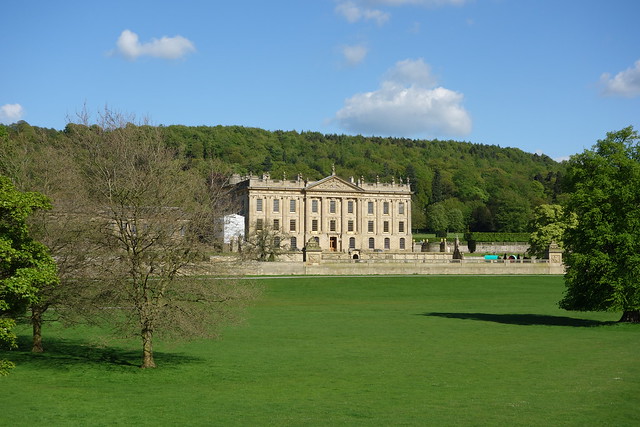 The white tarps on the northern side of the house were unfortunate, though.

Visitors are allowed to walk the fields, among the herd of grazing sheep. 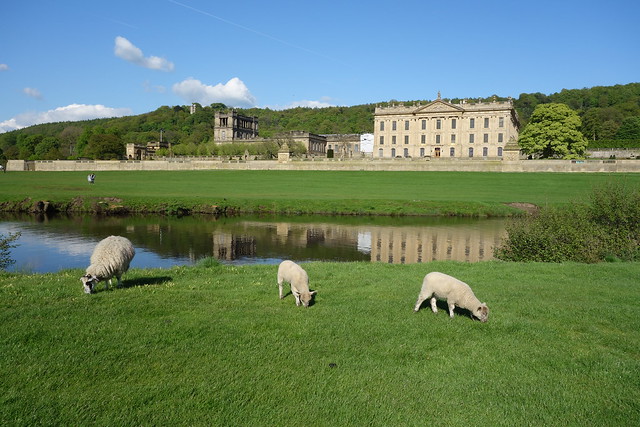 My first though was about how lucky these sheep were to live on the estate. And then I remembered they were going to end up as someone’s dinner eventually.

From that vantage point, you also get a pretty good idea of how expansive the estate really is. Can you imagine having this view from your windows?

I was so glad I made the decision to walk to the house and explore the parts of the grounds that I could, even if I knew was coming back the next day. It definitely made me even more excited for my tour of the house and gardens. 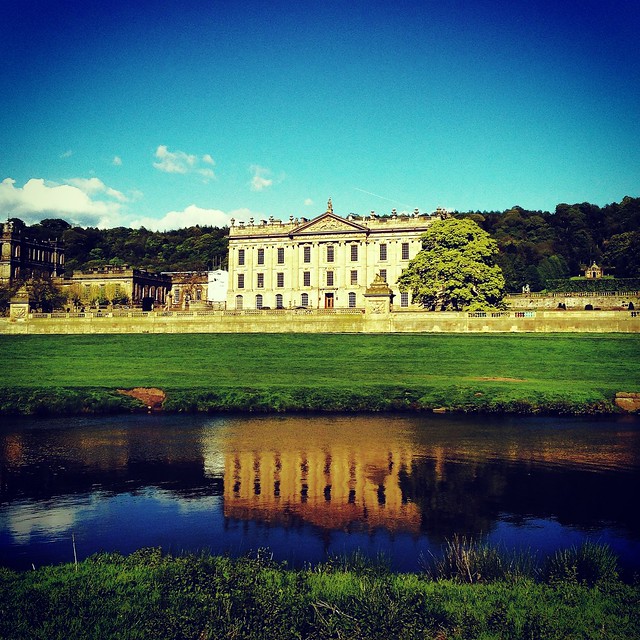 Because the little that I saw was already overwhelmingly beautiful, and surpassed even my high expectations of a place worthy to be used as Pemberley twice. And I haven’t even seen the inside of the house or the famous gardens yet.

One thought on “Chatsworth House, part 1”