Although it may seem otherwise, I didn’t just eat the entire time I was in Singapore. I was there for work, but did manage to walk around the city a lot (to burn all those Bon Chon calories).

So below is just some pictures I took of my trip, the things I saw that caught my fancy… 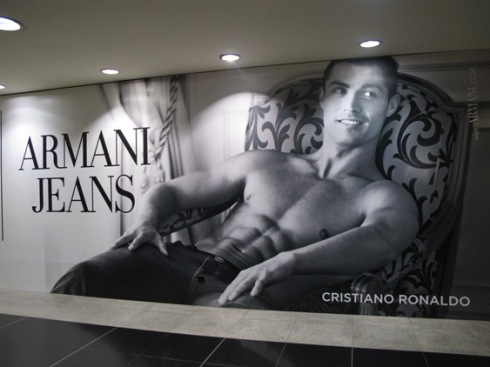 Good morning to you, too, Ronaldo!

I passed this advertisement every day on the way to work and to Orchard. There are worse ways to start your day, no?

And it's a registered trademark!

And I thought only Filipinos copied foreign brands (Charles’ Junior and Mang Donald’s, anyone?). But look at this! They even have the exact same font! Anyway, this store sells taro-based drinks, as far as I can remember. 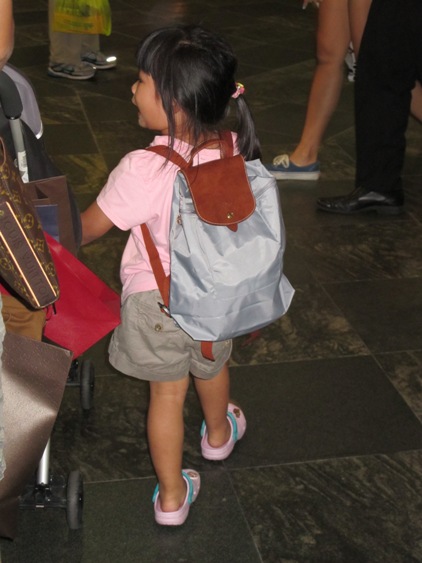 I saw this little girl in the underpass from Orchard to Scotts Roads. Geez, Louise. She’s no more than five years old and she’s already wearing Longchamp. When she’s a teenager, her parents have no right whatsoever to complain about her expensive tastes.

I finally saw the Loewe Papelle bags in person. These caused a stir when they first came out because, well, look at them. I knew they looked like paper bags, but I was amazed at how close the looked like the real thing (although, wouldn’t be these leather versions be the real “real thing”? Arrrgh. I’m giving myself a headache). Naturally, of course, the leather’s thicker and heavier-looking than actual paper, which take away from the illusion. But still.

The Human Tiles at Marina Bay

The Human Tiles is an art installation my friends and I came across while walking along the Marina. I’ll take a shot at explaining it, but if I don’t do a good job of it, just click on the hyperlink to go to the installation’s website. Basically, people step in front of a light (the corner of which is barely visible in the right bottom corner of the picture) and your image is captured by a video camera from behind. That image is then manipulated somehow (mirrors? I don’t know) then reflected hundreds of times on the wall whose picture you see, forming “tiles”. As you move about, walking or waving your arms, in front of the light, the pattern on the tiles changes with your movement (get it?). The effect is quite dazzling, and it’s fun to watch how the pattern changes while you move.

Light "plants" at the Marina

These giant, plant-light fixtures at the Marina made us feel like we were in the movies “A Bug’s Life” or “Avatar”. And the “stems” actually swayed with the wind, which could either be cool or a little creepy, depending on your point of view.

These, though, were my fave. I think they look like permanent fireworks. These would look pretty in a garden for a party, don’t you think?

I feel like, any moment, legs will sprout from the bottom of this

Saw this at the Chanel window at Ngee Ann City. One word: yeeeucchh. Seriously, Karl Lagerfeld? This bag seriously reminded me of that book in Harry Potter, the one Hagrid assigned his students for his class, the one that bit and chewed everything and needed a belt to secure his mouth shut. Seriously.

After the bag above, the infamous Chewbacca boots (displayed in a tropical country such as Singapore, no less) look almost normal. Almost. 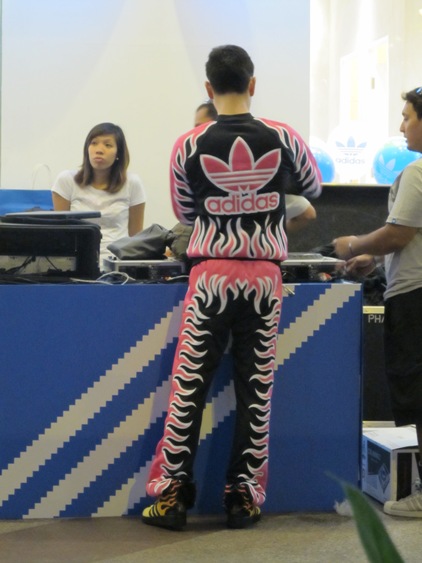 And finally, I shall leave you with pics of my other non-Din Tai Fung, non-chicken meals…

This was my last breakfast at the hotel, when I finally had the time to have more than fruit and bread. Really yummy waffles with generous dollops of whipped cream and syrup, steamed barbecue pork buns and dumplings (which is why I love breakfast at Chinese/Chinese-influenced countries), turkey bacon and some fruit (part of my futile attempt to justify this breakfast as “healthy”).

And, last, but not the least, my set meal from Ramen Santuoka at Central.

Ok. Enough na muna about food. My arteries/wastline/weighing scale are all begging me to stop.