When I was a little girl, going to church every Sunday was a bit of a sartorial to-do. “Sunday Best” really meant something during those days. My sister and I would wear our best dresses, the ones with puffed sleeves and sometimes even light petticoats underneath. We would wear ribbons on our hair and our white fancy shoes with white socks. My mom and aunt would wear dresses, skirts or slacks, NEVER jeans. They would make an effort when doing their hair and would put on some makeup.

But those days are long gone. And while I’m happy that going to mass no longer requires wearing heels and (horrors!) makeup, I can’t help but feel that some people have taken the casual-ness to a whole new and completely inappropriate level.  I know I run the risk of sounding preachy, but, I don’t really care. So here goes your first dose of unsolicited fashion advice: what NOT to wear to Church. 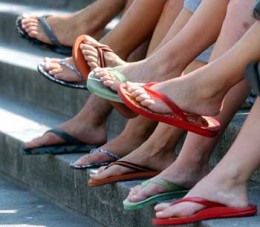 I don’t give a rat’s tush if you’re wearing Swarovski crystal encrusted, limited edition Havaianas. No matter how expensive or “designer” they are, they are still tsinelas. I blame the Brazilian brand for this, because, pre-Havainas, who would’ve ever attempted going to mass in their Beachwalks? But the bottom line is the fact that they cost the equivalent of 20 pairs of Spartans doesn’t mean they are suitable for Church. 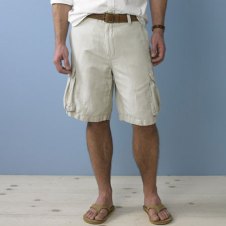 Guys wearing cargo shorts: bad. Girls wearing short shorts: let’s put it this way: Paris Hilton may be, well, Paris Hilton, but even she will not be caught dead in shorts in church (assuming she doesn’t spontaneously combust the moment she crosses the threshold). Take heed.

The only excuse to wear shorts is if you’re below 5 years old and shorts were chosen because it’s easier to change your diaper with them than if you were wearing pants.

Granted, there are some message shirts that spread peace, joy and would generally bring a smile to people’s faces. But that doesn’t make them any less distracting when you’re deep in thought and reflection. Those ginormous block letters make me feel that I’m being silently yelled at with multiple exclamation points. And Church is the last place anyone should feel that.

There is, however, a special Anna Wintour-supervised torture facility for those who wear gallingly inappropriate message shirts to church (or anywhere outside their own home, for that matter), like the man I shared a pew with last week. His shirt said: “Make it legal. Do it with a Lawyer.” (excuse me while I throw up my lunch)

This is pretty straightforward: if it was intended to be worn on the beach then it belongs nowhere within a mile’s radius of a place of worship. This includes the aforementioned flipflops and shorts, plus sando/wife-beater (helloooo, even the name of the shirt is wildly inappropriate) tops worn alone and shoulder and back-baring maxi dresses (again, worn alone). If you can’t bear the heat in your church long enough to keep your shoulders and legs covered for an hour, find a new church.

Do you have anything to add to the list?

*photos found through Google Images. I would’ve taken my own pics, but only thing worse than inappropriately dressed people in church is someone taking pictures of them for her blog.